I know I’m not the only one who’s done it. A Google search for “crank position sensor broken off in engine” and it’s pages upon pages of results are testament to a poor design that has pissed off many a mechanic. The sensor itself doesn’t fill up the entire bore in the engine block where it is installed. This leaves just enough room for a ring of rust to build up behind it, preventing it from being removed. Couple that fact, with the cheap, plastic construction of the sensor body, and you have a recipe for disaster. Specifically, the damned sensor body snapped after I tried for about an hour to coax it out of it’s hole.


So here I was with half a sensor stuck in the engine block, and now there’s nothing to grab on to in order to manipulate it out. I was half tempted to have the damned thing towed off to a professional mechanic and just pay to have him deal with it. Then I remembered that the bill for that would just piss me off more than doing it myself. I’ve built engines from the inside out. I’m not about to let a stupid plastic plug of a sensor beat me. I just needed to sleep on it and figure out a way to remove it. My Google search primarily suggested that I was going to have to drop the oil pan to push it out from the inside. I didn’t want to do that, so I decided to wait and see what ideas came forth.

My overnight brainstorm suggested that I might be able to get the Dremel in behind it with a small grinding stone and smooth out the bore so that it would come out. That didn’t work out so well. There was little room to work in there, and there was just enough of the damned sensor left that I had a hard time getting a clean shot at cleaning up the rust ridge. Next idea was to drill a hole in the center of it, run a screw into it, and pull on the screw. It sounds easier than it is, but ultimately this worked. 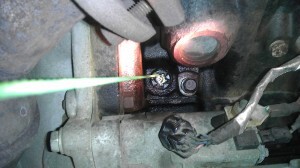 I had to use the Dremel to drill the hole, since there wasn’t enough room to manipulate my cordless drill in there. I ran the screw in as far as I could. What was left of the sensor started to spin, so I couldn’t get the screw very tight. I tied some twine around the head of the screw and attached the other end to a hammer. As I swung away with the hammer, the twine stretched and stretched and… SNAP! Still no good. Then I tried to double up the twine… and proceeded to snap that. 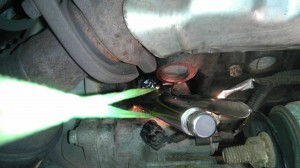 Instead of going through all the intermediate steps, I then decided to go for the gusto and try 8 strands of twine looped around a big-ass pair of vice grips. I didn’t snap that, but I still couldn’t get the sensor out with the hammer. I did manage to get it to start moving in the right direction though. It came out and got wedged on that rust ridge. I seized the opportunity to tighten the screw a couple turns, since the sensor obviously wasn’t going to spin anymore. 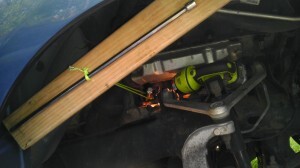 Next, I decided to take some advice from an old Greek friend named Archimedes. Leverage is your friend. I drilled a hole in a 2×4, ran the 8 strands of twine through it, and proceeded to use it as a lever against the frame.

When I heard that POP sound and everything went loose, I pretty much expected to see the head of the screw popped off or the vice grips slipped off or something that would piss me off even more. Instead what I saw was a hole where the sensor used to be! 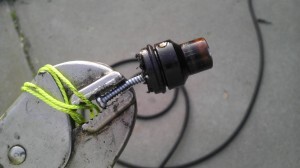 No dropping of the oil pan for me. The screw in the sensor body method worked! So to anyone else out there with the same problem (and lets face it, I know this isn’t an isolated incident), you can remove what’s left of the sensor without having to get inside the engine. And to the Chrysler engineers who designed the 4.7L V8… fuck you.