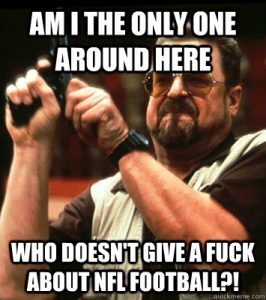 I’m not what you might call an avid sports fan, but I do enjoy watching my 1 football game per year. Well, not this year. It’s a bit about the kneeling thing, but not entirely that. It goes way beyond that. It’s about priorities. These asshole athletes think they’re important. They think that by being controversial, they’ll make a change. Not that they’ll actually do anything actively to affect whatever change they wish to bring about, but they’ll sure act a fool in front of a TV camera for their cause.
The problem isn’t so much that they think they’re important. Why on Earth should some disrespectful dipshit, who’s only job is to play a game, be the center of everyone’s attention? The problem is that they’re made to be important by the mass of sports fans, spectators, television networks, team owners, stadium owners, stadium vendors, etc… So many people will lend credence to the athlete’s sense of self-importance by tuning in and watching the game, or by buying the merchandise, or by paying $12 for a sub-par beer at a stadium. It’s through these actions that these athletes are made important.
The problem is misplaced priorities. So many people put these assholes up on a pedestal. These morons get paid millions of dollars to play a game, while people who are EMTs, paramedics and fire fighters struggle to pay their bills. Hell, volunteer fire fighters don’t even get paid to risk their lives to save others. And yet, these athletes have the audacity to think they’re important.
Well fuck them. Today we’re having our Superbowl party, but we’re doing it without the Superbowl. I don’t give a rat’s ass who’s playing, who’s winning, or what commercials they’re airing. We’re having our nachos, and tacos and other Superbowl fare, but we’re watching a movie instead. I doubt any professional athletes are heartbroken over my protest, but I feel better about it.