Dave Mustaine from Megadeth was a guest on the show this week. I really like Dave, and he’s always come off as a pretty “regular guy” in his interviews. However, I do take issue with some comments he made in this past interview.

Here’s the show I’m referring to:

Get More:
Megadeth, That Metal Show

About 20 minutes into the show, Dave is asked about his views on how the music industry has changed since the start of his career.

I think with all the digital audio workstations and people being able to use computer software to make songs that you’ve got a lot of talentless droves out there that are making songs that don’t deserve to be in the music industry, that don’t deserve to be doing what we do, because we’re the entertainers. We were born to entertain you. You’ve got a lot of people out there that have no buisness entertaining… 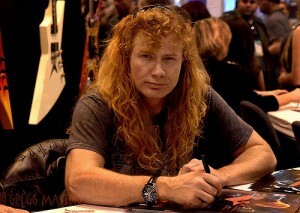 As technology has advanced, the power to digitally record and edit professional sounding music in a home studio has become affordable to the masses. I can understand how someone like Dave Mustaine, who was literally a “starving artist” struggling to get a start in the music industry, might frown upon the difference in effort it takes to make a recording these days vs how difficult it was for Metallica and Megadeth to get their start thirty years ago. However, this attitude he takes is more of a “stay out of my business” rather than one that fosters new artists to create. I think he lost sight of the fact that he started out in a garage once, just like everyone else did.

Then to add insult to injury, a couple minutes later he tries to bring himeself down to the level of the commoners he was just belittling, saying:

I was a poor kid. I was brought up on Food Stamps and the Welfare System. I broke out of that. I survived. I succeeded, and I will never put that trip onto our fans that, you know what you deserve to pay high dollar to come see me because I’m special. I’m not special. I’m just like everybody else. I’m total common, garden variety vegetable.

This is a stark contrast to his earlier statement, “[they] don’t deserve to be doing what we do, because we’re the entertainers. We were born to entertain you.”

I understand that record sales and recording aren’t the cash cow they used to be, and that has made an impact on the earnings of many musicians. However, I don’t think that taking a stance of discouraging people from being musically creative in order to set yourself above the rest is the right attitude to take.

Dave Mustaine, you disappointed me.