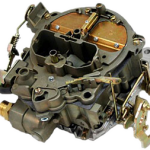 Computers are wondrous and glorious things… except when they malfunction and prevent our vehicles from operating, of course. I’ve been working on cars since before I was licensed to drive them. I’ve rebuilt countless Rochester Quadrajunks, I’ve replaced ignition points (with a swiss army knife in a parking lot during a snow storm), I’ve used a flashing light and a vacuum pump to time an engine’s ignition. None of these things matter anymore because all of these functions have been taken over by the mysterious Engine Control Unit.

That’s all fine and dandy until the ECU starts to misbehave in strange and unusual ways that make us think the problem isn’t the ECU. And thus begins my tale of Jeep woe. 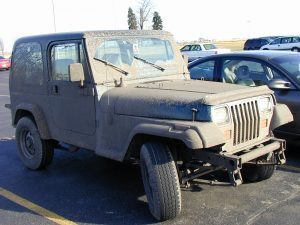 I have a 1995 Jeep Wrangler (the last of the YJ’s) with a fuel injected, inline 4.0L 6 cylinder engine. That engine is a magnificent piece of automotive engineering that can (and frequently does) take whatever punishment I see fit to inflict upon it. That is, until you let it sit dormant for an extended period of time.

My Jeep sat unloved for a while, and when I decided to give it some attention again, it held a grudge. The engine would crank, but she just wouldn’t start. Now after having sat for so long, there were any number of things that could be the cause, thus complicating my troubleshooting.

My first thought was shitty fuel, so I decided to test that theory by using one of my favorite automotive helpers, ether starting fluid. I sprayed a bit inside the throttle body and cranked her over. BOOM! The engine roared to life! Fantastic! … and then it died. I tried again, and observed the same results. It ran until the starting fluid was gone, then sputtered and died. Well, it’s not a spark problem and it’s not a compression problem so it has to be a fuel problem. With a couple quick squirts of that wonderful smelling stuff, I eliminated two thirds of the possible causes.

I decided to see just how nasty the fuel was that was sitting in the fuel system. I depressed the Schrader valve on the fuel rail, expecting to have some foul smelling, stale gasoline spray out, but there was just a trickle. Okay, now we’re getting somewhere! No fuel pressure. I test by turning the ignition on and listening for the fuel pump to kick on (or lack thereof.) Nope, no fuel pump noises. Something else I noticed… no dash buzzer noises either. You know, the one that goes off with the diagnostic lights and reminds you to put your seat belt on. You know… the one we are all trained to ignore because we hear it every time we start the vehicle? When did that stop working? It’s such a subtle thing that it could have been that way for years and maybe I just didn’t notice. I’ll file that bit of information away for later. 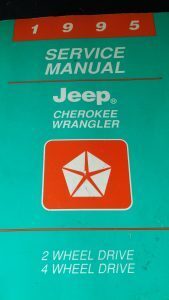 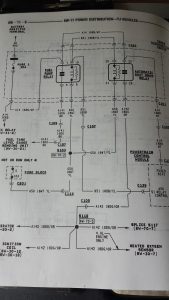 But the relay tests good. Now I’m puzzled. Okay, it must be a problem activating the relay. I break out the service manual and start looking at what can affect the input to the fuel pump relay. There’s another relay called the Auto-Shutdown relay that can interrupt power to the fuel pump relay (among other things like the ignition system). Ignoring the fact that that the ignition system worked, I test the Auto-Shutdown relay. It’s good too. I bypass it just for the hell of it, and the Jeep behaves much the same.

So what the hell is going on here? I use a multi-meter to check the voltage being applied to the coil on the fuel pump relay. Low and behold, it’s getting a full +12V. So based on what I’m seeing, the relay should kick on and activate the fuel pump, but when I insert the relay, it doesn’t latch. Okay… maybe a faulty ground? Again I trace all the ground points in the service manual and they all check out okay. I check the resistance of the wires that activate the auto-shutdown relay and the fuel pump relay all the way through the wiring harness to the ECU and they’re all good! Okay… well the only thing left is the damned ECU! It applies the proper voltage, but my suspicion is that it can’t supply the current to keep that voltage up when the relay is attached.

So I start researching how much it’s going to cost to get a new ECU for a ’95 Wrangler, when I happen upon an article on a forum that sounded familiar. Every forum post I had read prior to this ended up being solved with a fuel pump relay, so I started to ignore most of them. What caught my attention this time was the mention of a lack of the seat belt buzzer! (See, I told you that would come in handy later!)

This gentleman went on to say that he pulled the ECU and found 3 large, electrolytic capacitors that were deformed and leaking. He replaced them with commonly available parts and everything came up roses! Well, it was worth a shot, since I had come to the conclusion that I needed an ECU anyway. The worst thing that can happen is I fuck it up and have to buy a new ECU. Nothing to loose, and everything to gain. 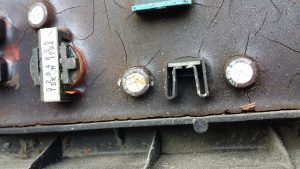 I pulled my ECU out of the Jeep and opened the cover. Yep, those caps look crusty. Okay, so it’s off to Radio Shack. Not because they’re a good source of things like that anymore (because they’re not), but because it’s the only place that there’s a chance in hell of me finding discrete electronic components in stock on a weekend. 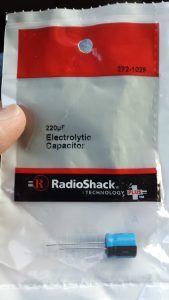 Well it took a trip to 2 different Radio Shacks to get a total of 3x 220 uF capacitors, but I got them! Now the fun begins. You have to excavate them from the rubber/wax/epoxy shit that the entire ECU is encased in. I dug out around them on both sides of the circuit board, and used some flux, de-soldering braid and a soldering iron to carefully remove the old caps. MAKE A NOTE OF THE POLARIZATION OF THE ORIGINAL CAPACITORS! 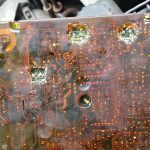 Electrolytic capacitors are polarized. They have a positive and negative lead, so it matters which way you put them in. I’d hate for you to go through all this trouble on your own, only for such a simple mistake to render it all useless. Chances are, if you’re confident enough to do board level repairs on a vehicle’s ECU, you’re aware of this, but better to mention it just the same. 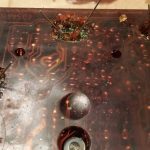 Next, you insert the new capacitors, being certain that they’re going in with the same polarity as the ones you removed. Solder them to the board, and then reinstall the board to test. You’re not done yet, but now is the time to see if the repair worked. In my case, this did the trick! I turned the key on, and the seat belt buzzer told me things were going to be different this time! The engine roared to life, and then there was this awful, screaming noise! It was a seized alternator, which has no bearing (pun not intentional – but funny just the same) on this article whatsoever. It’s not even worth mentioning, except for the fact that I was amused that the starter was able to crank the engine enough to start it even while pushing against a frozen alternator! 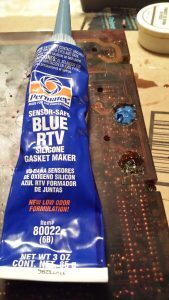 So that goo that you’re digging through isn’t just to cause you problems when it’s time to replace 20 year old capacitors. It seals moisture and dirt out of the circuit board. So once you replace the capacitors and verify that your fix worked, it’s time to seal it back up. I’m a fan of Permatex, so that was my obvious choice to seal it back up. Back in the days of rebuilding Quadrajunks, it was Permatex part# 77B. Now it’s part# 80022, which doesn’t quite have the same ring to it. I sealed up both top and bottom around the caps, and that’s all there was to it! My Jeep was alive and kicking again, and all for a grand total of $6 and time well spent. 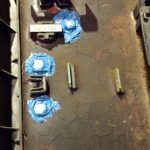 I don’t remember exactly what forum it was that pointed me in this direction. This write-up is being done in 2016 and the repair was done in 2014. I would much like to link to the original to show my appreciation, but I haven’t stumbled upon it since. It was a tremendous help to me, and so I decided to write my own in the hopes that someone out there might find this information as useful as I did.