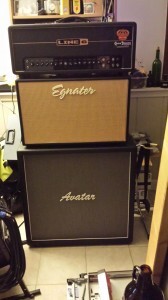 And just this past Friday, my son Joe tested for and advanced to Purple Belt in Tae Kwon Do! During the test, you have to break a board while demonstrating proper technique for a particular kick or punch. Last time Joe advanced, that part of the test gave him the most trouble. He was a little nervous about it. Despite his apprehension, he was able to break the board on his first attempt. Go Joe! 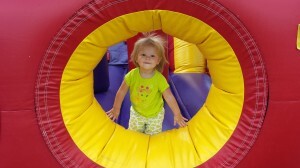 Okay, so Kate isn’t exactly new, however bounce houses are new to her! We had our annual Niemeyer Family Reunion last weekend, complete with a giant bounce house for the kids to go wild in. This was Kate’s first time in one, and she absolutely loved it! I think she liked posing for the pictures too. 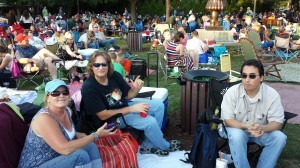 Not quite blue, but how about the Blues? My buddy Ken’s birthday was this weekend. As a present to him, his girlfriend bought 4 tickets to see George Thorogood and the Destroyers and Buddy Guy at Ravina in Highland Park Illinois and told him to invite two people to come along. Fortunately, I was one of those two! This has to be one of the coolest venues I’ve ever seen. We had lawn seats, but lawn seats at this venue are unlike any other I’ve ever seen. Ken messages me and says “you can bring alcohol in, so byob!” It was a completely foreign notion, but I trust the man. So the little blue Playmate cooler that I drag everywhere got packed with a growler of Crown Brewing’s Special Forces IPA, and off I went! 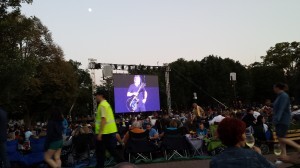 Seriously, you have to get lawn seats to a show at Ravina at least once in your life. It is so cool. It’s like a giant picnic party on the lawn. You can’t actually see the stage, but there’s speakers all around and a giant screen in the middle. People have tables and chairs and food and candles and wine bottles and coolers full of beer. It’s definitely an experience. The show was awesome too. George Thorogood is just a fun performance to see. Buddy Guy is a blues legend, and just seems like a genuinely cool dude to boot. It’s funny to see him sing about the blues, yet smiling the whole time. I kinda wondered about that until he very playfully said right in the middle of a sad tune, “I didn’t write the fuckin’ song!” He even got down into the crowd and let a little kid pick at his guitar while he was fretting the notes during a solo. 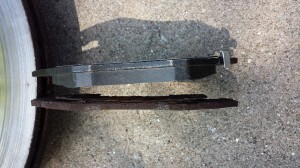 Lets see… what else is blue… Oh, Jenn’s Durango is blue, and it needed new rear brakes. Jenn called me on her way to work Thursday and reported a “bad grinding noise coming from the back” when she used the brakes. Well… I think I found out why! They start making noise when they wear down to the steel. Yep, that brake job was overdue but I knew that. I bought the discs and pads a year ago but never got around to doing it. Well they’re done now! 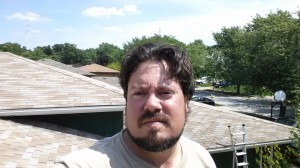 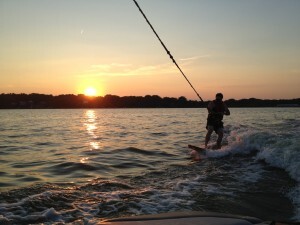 I feel old. Not like in a “Get off my lawn, you young whipper-snappers!” kinda sense, but in a “I usually sit in a chair all day but this weekend I climbed around on a roof, trimmed a tree, cleaned the gutters, surfed, played at being an auto mechanic, mowed the lawn, went to a concert, and drank a lot of beer” kinda sense.

I went surfing with Keith and Steve again last night. I’m really getting a good feel for it. Last night I rode the wave the entire length of Cedar Lake, and only had to have Keith bail my ass out with a sharp right turn a couple of times!

What’s funny is, doing all that crap makes you feel kinda young… until you have to get out of bed the next morning.

Last week, my friends Vince and Carmen moved to Florida. Fortunately, we had a little cookout gathering down at Jeff’s place the weekend before so I had an opportunity to hang out with them for a little while before they left. I met Vince years back when I worked at South Newton Schools. We were founding members of the NeoDawgs paintball clan, we frequently killed each other on the paintball field and in the virtual world of MoHAA. Vince is also a fellow musician, an all around good dude, and as of last summer he is the proud owner of my ’06 Honda Shadow Aero. (You should hear it now with the new pipes he put on it. It sounds meaner than my Harley!) Now he’s cruisin’ around on my old bike 365 days a year in sunny Florida next to the ocean. I see a road trip in my future. Vince, I just may have to borrow a spot on the couch for a night! (Yeah, I was wondering how I was going to work “Borrowed” into this one too. I figured It’d be a cop-out to put this one under the “Something Old” section! I can say that now because I don’t think Vince would drive 17 hours to smack me for it!)