Since when did a public memorial become the property of the government? Last I checked, the government was supposed to work for “The People.” Now if they want to stop providing grounds keeping and janitorial services for public parks, that’s all fine and dandy. But by no means should they have the authority to bar entrance to places that are “public.”

Of course the explanation is obvious. Each government program is faced with the realization that this shutdown is hardly going to make life difficult for anyone by itself. I can’t for the life of me figure out how ceasing all IRS audits is really going to make people regret letting the government shut down. So in a desperate attempt to make people notice them, much like a 3 year old throwing a temper tantrum, government agencies have gone out of their way to piss people off and blame it on the “shutdown.”

So here’s a question for you: How goddamned stupid do you have to be in order to keep trying to push your regulatory agenda upon the American Public after they’ve told you, “No, we’re not going to pay for it, even if it means shutting down everything you do!”

The simple answer is unfortunately, goddamned stupid enough to be Barack Obama.

A worse question is, “How goddamned stupid do you have to be to vote for Barack Obama?”

According to the FEC (which is shut down right now except for their website), the answer is: You must be less intelligent than 48.94% of people who voted in the 2012 Presidential Election.

I hope that the idiots comprising the 51.06% that voted for him are happy with their choice. So, if you’re reading this and wondering to yourself, “Hey, did he just call me an idiot?” the answer is an emphatic yes. Yes I did. Take some solace in the fact that you figured it out. You’re probably in the upper echelon of the idiots. 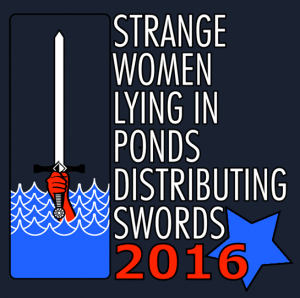 Seriously, does this make any less sense than letting the TV pick your president?

“You don’t vote for kings.”

“Well, ‘ow did you become king then?”

“The Lady of the Lake, her arm clad in the purest shimmering samite, held aloft Excalibur from the bosom of the water signifying by Divine Providence that I, Arthur, was to carry Excalibur. That is why I am your king!”

“Listen — strange women lying in ponds distributing swords is no basis for a system of government. Supreme executive power derives from a mandate from the masses, not from some farcical aquatic ceremony.”

“Well you can’t expect to wield supreme executive power just ’cause some watery tart threw a sword at you!”

“I mean, if I went around sayin’ I was an empereror just because some moistened bint had lobbed a scimitar at me they’d put me away!”

“Ah, now we see the violence inherent in the system.”

“Oh! Come and see the violence inherent in the system! HELP! HELP! I’m being repressed!”