Training for the Chicago Marathon continues, albeit at a slow pace. I haven’t improved as much as I had hoped, and I think much of that stems from the fact that I hate running on a treadmill. I’m really looking forward to being back on real asphalt again. Of course that would require that this winter end at some point. I did, however, get some really cool gadgets to help me gauge my progress. I picked up a Garmin Forerunner 620 GPS watch and heart rate monitor. The heart rate monitor stuff is really cool, and the couple times I’ve gotten to use it outdoors (obviously before Northwest Indiana was magically transported to Antarctica) the GPS function was dead on for distance and pace accuracy. It’s not so accurate indoors when it has to rely on it’s internal accelerometer, but it’s close. I picked up a foot pod sensor to use while indoors and that helped tremendously to increase it’s accuracy.

Even though I’m not where I want to be yet, I’m still improving, and I have every confidence that I’ll be race ready, come October. March 5th is the start of open registration for the Chicago Marathon. Since I don’t really want to go fundraising, I’m going to take my chances in the lottery. For those of you not familiar with the process, you can be guaranteed a spot in the race if you join a sanctioned organization and raise over $1000 in charitable donations, or you can put your name in the lottery and see if you get lucky. Since I’m not much of a philanthropist, I’m going to opt for the latter. Should I not make it into the race, I still intend on running an equivalent distance this fall using the watch for my timing and distance measuring. Then I’ll toss my name in the hat again next year to see if I can make it official.

Little Dave (who’s not quite so little anymore) bought his first computer with his own money recently. He ordered a Dell Inspiron 17R which is about as good as Dell has to offer for gaming without getting into an Alienware. So far he’s only had to do the factory restore on it once! Ah, how I wish there was such a thing back when I first started tinkering with computers. Back then if you wrecked something, it was either fix it, restore it from backup, or format it! (Listen to me… “back in my day, we walked to school 12 miles in the snow uphill both ways…) Anyway, his computer is better than mine, so I’m going to have to fix that sometime in the near future. 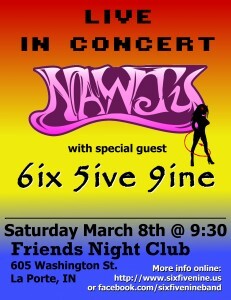 Cool stuff on the horizon: At a party back in December I met Mandy, vocalist for the band Nawty. We jammed around a bit and got to talking shop. She offered to give my band 6ix 5ive 9ine an opportunity to open for them at an upcoming gig. We hashed out the details, and I got the final green light last weekend. We’re opening for them at Friends Nightclub in LaPorte, IN on Saturday March 8th at 9:30pm.

6ix 5ive 9ine will also be playing at Hunley’s in Cedar Lake on April 5th. I hope to see you at either gig. (or both!)

I’ve acquired a new audio recording interface, the Focusrite Scarlett 18i20, that allows me to record 8 separate audio channels simultaneously. It also serves as a 1U rackmount mixer even when it’s not hooked to a computer, so I’ve made it a permanent part of my PA system. At the last gig that 6ix 5ive 9ine played, I had 3 vocal mics, a guitar mic, a direct line on the bass and 3 mics on the drums. I was able to push only the 3 vocal mics to the mains and monitors, but still record all 8 tracks of direct audio. What that means in simple terms is, I can record a live performance and make it sound like we were in a studio (kinda).

To get a feel for how it sounds, take a listen to this. This was recorded live at the Jan 25th Hunley’s gig with just a touch of reverb added to make it sound like we’re in the same room as you instead of sounding like we’re in your head.

There, see? I knew I could come up with a few more words. Oh, and if I don’t get to ride the Harley soon… well… lets just hope I get to ride soon. This is definitely the longest I’ve gone without riding since I bought the Honda back in 2006. I guess the good news is that the Harley’s odometer is getting a break. After all, it is a 2011 model and I’ve put over 25,000 miles on it. Maybe I’ll make up for it by riding to Arizona this summer. Yep… I like that idea.